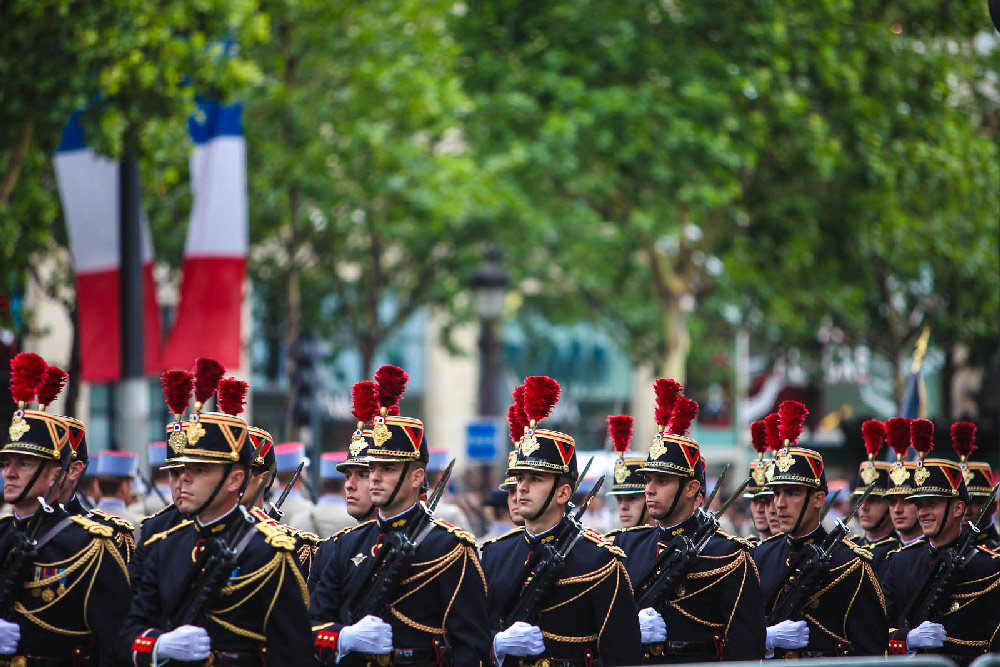 On 14th July it’s France’s biggest summer celebration, Bastille Day, or la fête nationale if you’re French (as nobody in France refers to the holiday as Bastille Day). The holiday commemorates one of the most well known events in French history, the Storming of the Bastille in 1789 and is celebrated with parties up and down the city, the infamous Fireman’s ball and a huge firework display. To help you plan your Bastille Day in Paris we’re going to cover the highlights of this French holiday and share with you our Bastille Day travel tips.

The celebrations for Bastille Day in Paris actually start the evening before on the 13th. The most famous of these celebrations is the Fireman’s Ball (also known as Bal des Pompiers) which takes place over two evenings.

The ball is a French tradition where fire stations open their doors and host patriotic parties. At a Fireman’s Ball you’re likely to find traditional French music, fair games like the tombola and firemen hosting in their uniforms.

If you’re catching the metro home after a Fireman’s Ball, check ahead for when the last train from the station will be. The last trains arrive at their final stop at about 2:15 am the day before a public holiday and 1:15am on a normal weekday night.

So expect the last trains to leave somewhere between 1am and 2am the evening before Bastille Day and between 12am and 1am on Bastille Day. If you’re a real party animal, metro trains start running again at 5:30am.

The 2017 Military Parade for Bastille Day in Paris starts at 10:10am on 14th July when the President of France arrives at the Arc de Triomphe. The show kicks off with a welcome by Chief of Defence Staff followed by a tribute to the President of the French Republic. After this there is a fly-past by the Alpha Jets of the French Air Force.

The main part of the parade will see units of the French army march down the Avenue des Champs-Elysées on foot. They are then followed by motorised troops and after that it’s the mounted troops. Watching thousands of soldiers march down the avenue is an amazing sight to see and not to be missed if you’re celebrating Bastille Day in Paris.

The three closest metro stations to the action are Champs-Élysées – Clemenceau, Franklin D. Roosevelt and Kléber. Of course this means they will also be the busiest.

To avoid the crowds head to one of the nearby stations and then walk to the Avenue des Champs-Elysées. The following stations are all within easy walking distance: Iéna, Victor Hugo, Port Maillot, Ternes, Saint-Philippe-du-Roule, Invalides and Concorde.

Fireworks at the Eiffel Tower

From 9pm people will start to gather in Champs de Mars. Then at 11pm the Eiffel Tower will light up with hundreds of fireworks for a display that lasts for about half an hour. To watch the spectacular display head to the Champ de Mars or Place du Trocadéro.

The Bastille Day fireworks can also be seen from several vantage points around the city. The Arc de Triomphe, another important Paris landmark, is close enough to get a really good view. The Montparnasse tower will provide views from up-high and is a great way to see the Eiffel Tower any day of the year, but it does require you to buy tickets. Alternatively you can claim a spot by the River Seine where you can see some of Paris’s most amazing bridges and then when the fireworks start you get the added effect of seeing them reflected in the water.

The major viewing points such as the Champ de Mars and Arc de Triomphe will be very busy so the earlier you can get there the better. The nearest metro station to the Champ de Mars is École Militaire. There are also a few stations on line 6 which are very close. These are Passy, Bir Hakeim, Dupleix and La Motte-Picquet – Grenelle.

If you plan on being near to the Gardens of Trocadéro then Trocadéro will be the nearest metro station. As mentioned above, the last metro trains for the evening will be somewhere between 12am and 1am but check ahead for exact times or plan for an alternative mode of travel to get home if you’re thinking of partying late into the night!

How to get around when celebrating Bastille Day in Paris?

Wondering how to get around during Bastille Day in Paris? The metro is one of the quickest and easiest ways to travel across the city. It’s simple and easy to use but if you need extra help planning a route, the Paris Metro app is free to download on iOS and Android. The transport app includes live departure times, offline routing and you can find all Paris tourist attractions from using the Route Planner.